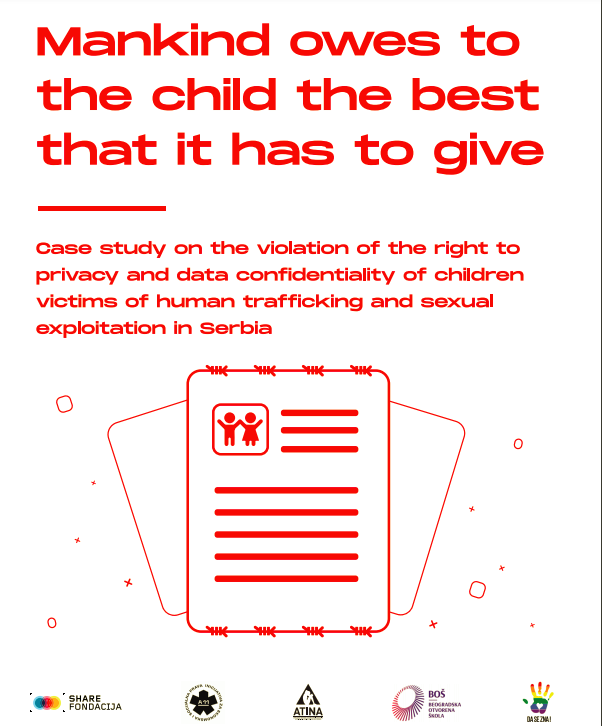 Toward July 30, World Day Against Trafficking in Persons, Atina – Citizens’ Association for Combating Trafficking in Human Beings and All Forms of Gender-Based Violence, is sharing with you a case study on the violation of the right to privacy and data confidentiality of children victims of sexual exploitation and human trafficking in Serbia, entitled “Mankind owes to the child the best that it has to give”. The study was created within the project “Reclaiming Privacy: A Tool to Fight Oppression” which is jointly implemented by the organisations Atina, Partners Serbia, SHARE Foundation, A11 Initiative, Da se zna, and Belgrade Open School, with the support of the European Union.

“Sexual abuse is one of the most severe and, in terms of consequences, the most complex forms of violence, which causes serious health, psychological, social and developmental consequences to the child. According to available UNICEF data, at least 120 million girls between the ages of 10 and 18 have been forced to have sexual intercourse or to engage in activities of inappropriate sexual content. In almost 90% of the cases, the perpetrators were known to them from before. On the other hand, data at the global level show that almost every third victim of human trafficking is a minor, with by far the largest share of girls in that number. In 82% of cases, women victims of trafficking were trafficked for the purpose of sexual exploitation, girls in 72%, while this is the case with 10% of men and 27% of boys victims of trafficking. According to the latest available data for Serbia from 2019, 64% of victims of human trafficking were persons under the age of 18, while in previous years, following the statistical data, the situation was similar, about 90% of them were girls,” said Jelena Hrnjak from the organisation Atina.

This study was created out of a need to show the life of a girl, Anna, a victim of human trafficking and sexual exploitation, whose problems did not disappear with the arrest of the trafficker but increased due to inappropriate conduct and lack of action of the authorities responsible for protecting this child. A particular aspect of the study deals with numerous violations of this girl’s rights, especially the right to privacy and data confidentiality with reference to unprofessional reporting of certain media in Serbia, which caused her irreparable damage by revealing her identity and publishing details about her sexual abuse.

The study represents a cross-section of the current situation in practice, in which harmful actions such as leakage of information from competent institutions are repeated over and over again, as well as publishing the identity of minor victims of human trafficking and details of their sexual abuse in the media. As such, it calls for and reminds of the importance of preserving the integrity of the child’s personality, reputation, dignity, rights and best interests of the child victim, and of the fact that children who have experienced violence must never be left without timely, adequate, legal, family and social protection from violence, as well as from secondary victimization.

“Despite the fact that this study shows a case of only one girl, a victim of human trafficking and sexual abuse, this case is unfortunately far from isolated. The study was created for this very reason, with the best intention to become a reminder and prevent such situations from recurring, but also to be an indicator to professionals in Serbia that they are obliged to constantly review their actions and to fully apply the existing laws and enable children, victims of sexual violence, as painless recovery from trauma as possible, and a successful and functional reintegration. In this regard, the study offers concrete solutions, i.e. recommendations for remedying the causes and consequences that lead to the violation of the right to privacy and data confidentiality of minor victims of sexual abuse and human trafficking. It also carries a message that we ourselves, as well as mankind, owe to the children the best we have to give,” said Andrijana Radoičić Nedeljković, the author of the study from the organisation Atina.

The study is intended for the interested and professional public, i.e. all those who deal with the protection of personal data, the rights of the child, and the protection of victims of human trafficking and sexual exploitation in Serbia and beyond. Also, it can be a valuable read for understanding this topic, and used in the work of civil society organizations, the private sector, the media, academia and others, both at the national and local level. The study itself was created with the best intention to remind professionals in Serbia that they are obliged to fully apply the existing laws and enable children, victims of sexual violence, as painless recovery from trauma as possible, and a successful and functional reintegration.

Bearing in mind the importance of this topic, we chose to particularly emphasise it on the World Day Against Trafficking In Persons, July 30, 2021.