Ahead of the European Anti-Trafficking Day, which is celebrated on October 18, Child Rights Centre and Atina have launched a digital Prevention Platform intended for children and youth aged 12-18, called “How to protect yourself from human trafficking”. It was created as a result of several months of work on the project “Awareness Raising Campaign on Trafficking in Children in the Republic of Serbia”, which is implemented with the financial support of the European Union and the Council of Europe, within their joint programme “Horizontal Facility for the Western Balkans and Turkey 2019- 2022”. The main idea and goal of the platform are for young people, who are at an increased risk of becoming victims of human trafficking, to be directly informed on how to recognise these risks and how to protect themselves.

In Serbia, as well as in other Western Balkan countries as well, children and young people make up the majority of identified victims of trafficking. This year, by the end of August, a total of 32 victims of human trafficking have been identified in Serbia, according to official data from the Centre for the Protection of Trafficking Victims, which operates within the Ministry of Labor, Employment, Social and Veteran Affairs. Out of that number, there were 9 minor victims all of whom were girls. Four of them were victims of sexual exploitation, 2 of labour exploitation, 2 were forced into marriage, and one was forced to commit criminal offences. We find similar statistics in other countries of the Western Balkans, and it is eloquently shown in the latest infographic of the Council of Europe, citing that in these countries 66% of identified victims of human trafficking are children.

The platform contains answers to the most important questions about human trafficking: how to recognise a trafficker or a victim, what every young person can do in such a situation, i.e. how to recognise and whom to report suspicion of human trafficking, and also the importance of the Council of Europe Convention on Action against Trafficking in Human Beings – an umbrella document and a universal guideline in the protection of trafficking victims. The Platform also contains instructions on how to protect yourself from human trafficking, and how to overcome the prejudices that accompany this problem. There is also a knowledge quiz on the basis of which high school youth can check their knowledge in this area. 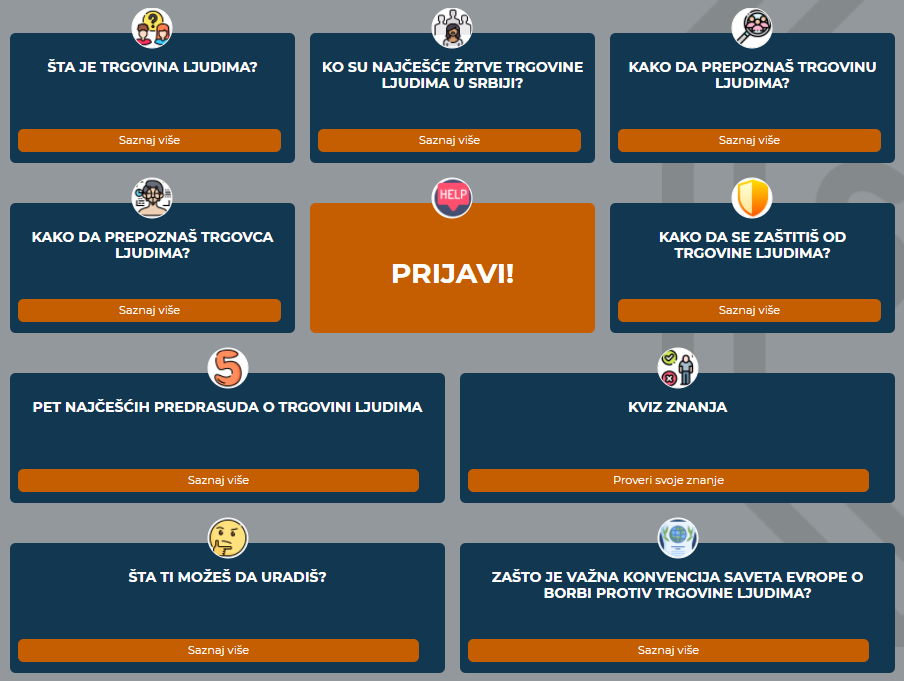 On the occasion of the European Anti-Trafficking Day, Child Rights Centre and Atins, want to point out the importance of preserving the integrity, reputation and dignity of the child’s personality, as well as protection of rights and best interests of the child victim, and they remind that children who suffered violence must never be left without timely, adequate, criminal legal, family and social protection from violence and must be protected from secondary victimisation. Child Rights Centre and Atina also remind professionals in Serbia who work with and for children, that they are obliged to continuously review their actions, fully implement existing legislation, and enable children victims of trafficking to recover from trauma as painlessly as possible and to achieve successful and functional reintegration.

The European Anti-Trafficking Day was established by the Council of Europe in 2005, with the aim to raise awareness of the importance of full implementation of the Council of Europe Convention on Action against Trafficking in Human Beings. The aim of marking this date is to inform the public and disseminate information, knowledge and best practices in the field of combating trafficking and protecting the victims among various actors at local, national, regional and wider European levels.